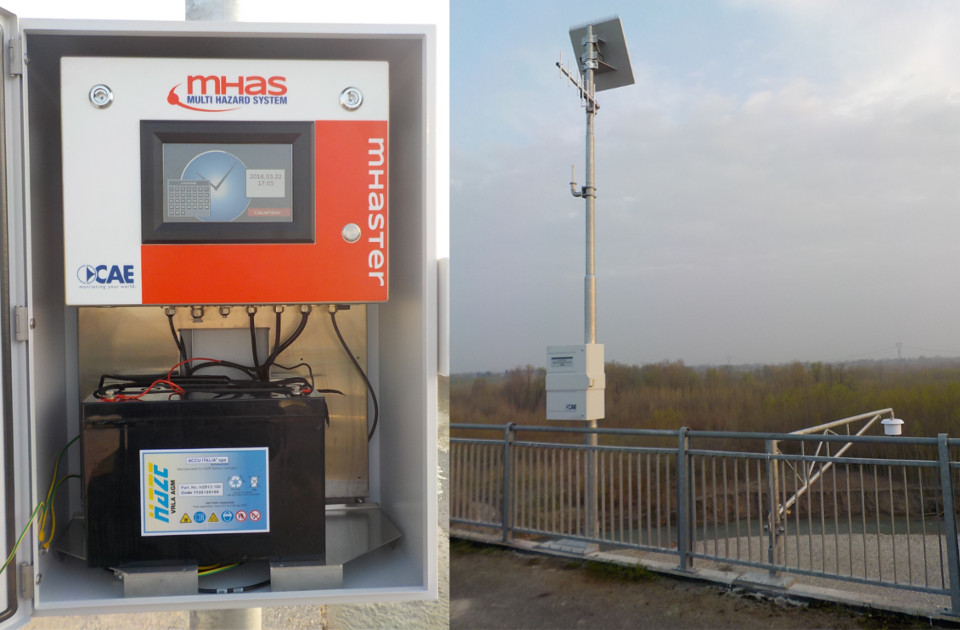 The stream Parma is a resource, but also a danger for the hydraulic safety of the town of Parma and the territories downstream of it. In order to reduce the risk of floods and alluvial phenomena as much as possible, a river detention basin has been built approximately 8 km south of the town, in Marano. The maximum capacity of this basin is approximately 14 million cubic meters of water and 12 million at the level of the "dam." Since 2005, this chamber has been working and the territory downstream of it has benefited from it in several flood events.

After carefully checking the functional status of the already existing piezometric sensors along the perimeter of the river detention basin, CAE is ready to carry out the integration interventions and their systematisation, in order to allow their acquisition by the AIPo plant in Parma by means of the integrated monitoring network of the Po basin. To this end, a network of wireless connections between the working sensors and the remote measuring station on the dam body that detects its hydrometric level will be implemented.

This hydrometric station, which is installed on the top of the chamber, is equipped with MHAS (Multi Hazard System) technology and will be integrated with 2 wireless radio communication modules with a different technology, for short/medium-range communication. The first W-Master module, with a 2.4 GHz communication frequency, will be used for short-range data transmissions between the station towards the knots near the chamber, while the second ACTI-Link, with a 868 MHz communication frequency, will be used for medium-range data transmissions to the most distant knots. Both wireless modules will be installed on the pole of the existing station and powered by the battery already supplied to the station. Then, the piezometric data will be collected from the hydrometric station, with programmable deadlines, together with the hydrometric level data of the dam, and subsequently transmitted via the radio network to the Parma Control Centre by means of the UHF radio device already functioning on the station, without the need to implement further centralized hardware and software. The data will also be transmitted, in backup to the radio system, via the existing GRPS/UMTS communication module, which will be able to operate in parallel with the existing radio module.

For each existing knot, equipped with functioning piezometric sensors, it will be possible to implement a wireless acquisition and transmission system for piezometric data, equipped with a different technology as far as the distance between the single knot and the existing hydrometric station is concerned. Each acquisition and transmission system will be integrated inside the already existing container and will be equipped with a buffer battery in order to guarantee its operation by means of the already existing solar cell.

Therefore, the proposed "turnkey" interventions will include detailed checks on radio connections, installations, the central configuration and the operation of the entire system.

This project will allow to optimize the investment made by the Administration in the construction of the river detention basin, by using already installed materials and structures, but also by centralizing the control and analysis of data in a single operating room, allowing therefore a more efficient monitoring of the state of the work over time.