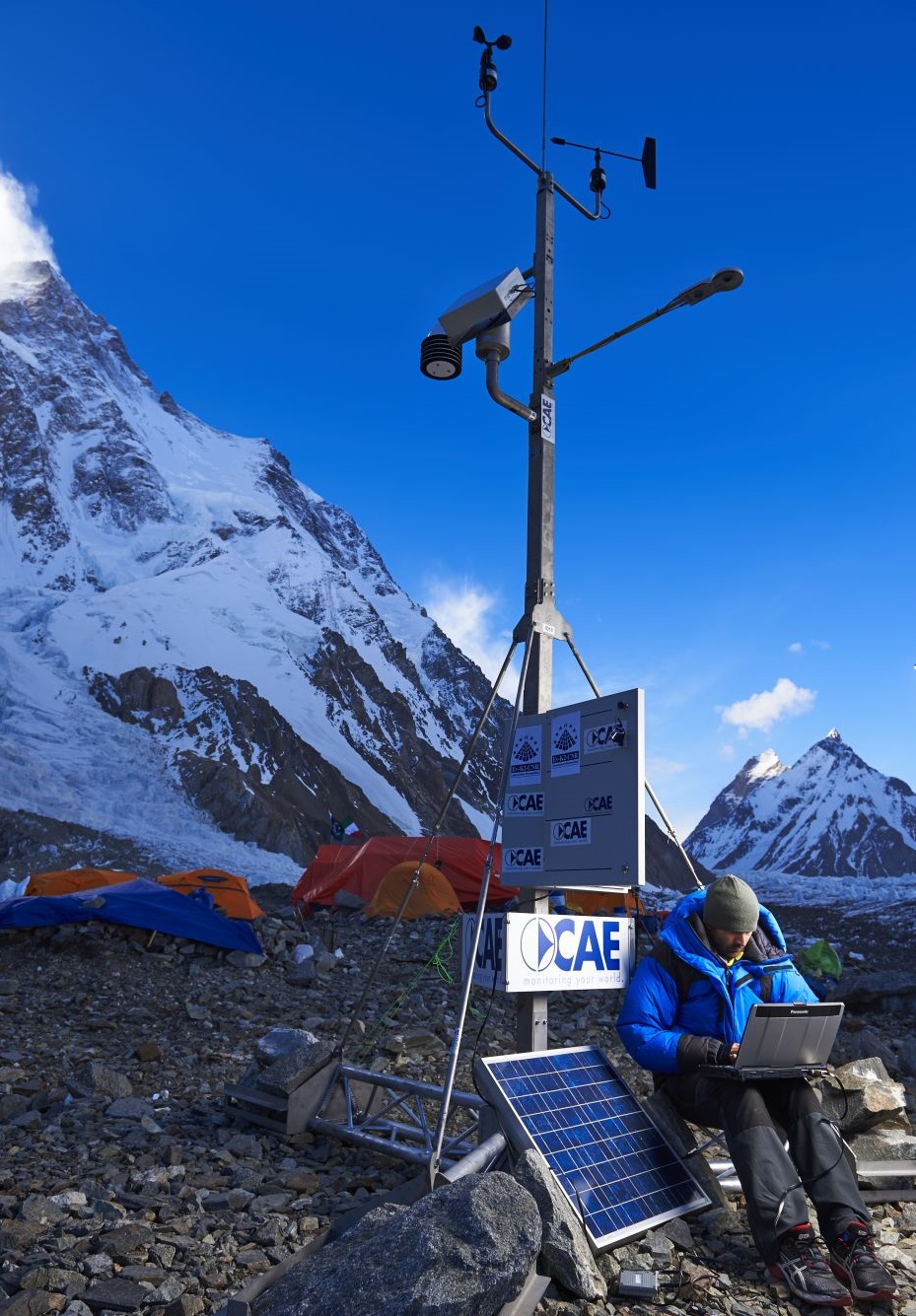 A CAE weather and climate station at the K2 base camp

To celebrate the 60th anniversary of the first climb on K2, CAE, as technological sponsor, supported the EvK2CNR association by providing a weather station to be installed on the last base camp before the summit.
This station, installed at approx. 5,000m, is equipped with wind speed and direction, temperature, humidity, atmospheric pressure, net radiation and snow height sensors.
The station provides real time weather data by means of a satellite router, allowing the measurements required to trace the altitude profile of the Sperone degli Abruzzi and to perform new measurements of the K2 summit.

In 1954 Achille Compagnoni and Lino Lacedelli, guided by Ardito Desio, were the first men in history to reach the summit of K2, the most difficult mountain in the world.
The success of that historical achievement was also due to the Pakistani members of the expedition and to the Hunza porters, which accompanied the team lead by Ardito Desio.
In 2004 the Evk2CNR Committee founded by Desio, with the support of the Italian Government, promoted two expeditions as well as other research and promotion activities in collaboration with other entities and associations, to celebrate the 50th anniversary of that conquest: more than 6,000 hikers, climbers and tourists took part to that initiative, visiting the heart of the Karakorum mountains.

In 2014, for the 60th anniversary, history repeated itself but with inverted roles: for the first time an official Pakistani expedition tried to reach the K2 summit with the support of the Italians. EvK2Cnr has been a supporter for the climbing part and organised the entire scientific part of the expedition in accordance with its historical DNA which sees a union between science and climbing.
CAE has collaborated as technological partner, supplying and installing a weather and climate station at the base camp of K2, in order to perform the required measurements to trace the altitude profile of the Sperone degli Abruzzi in real time and perform new weather and climate measurements of the K2 summit.

The supplied station is a SPM20 model installed also on Monte Cimone, which, while only reaching 2,165 m a.s.l. compared to 5,000 m for K2, is still a particularly difficult site where mechanical toughness and functionality must be ensured. It has been designed on purpose with a modular structure that can be divided into parts no heavier than 30kg each, to facilitate transport to the base camp both by humans and animals.
The station structure is made of AISI304 steel, while some parts are made of AISI316 steel (tie-rods), these two types of steel are certified and recognised by the American Iron and Steel Institute, and are effectively the most used types by the best companies in the world due to their toughness, hardness and durability.
It comprises a central pole with two sections that can be folded to facilitate easier transport and assembly.
It is also anchored to the ground by weights and pins positioned at the ends of the 3 base arms made of high-resistance aluminium lattices. All wiring is performed in such a way as to facilitate assembly and transport, since all cables have connectors at their ends. 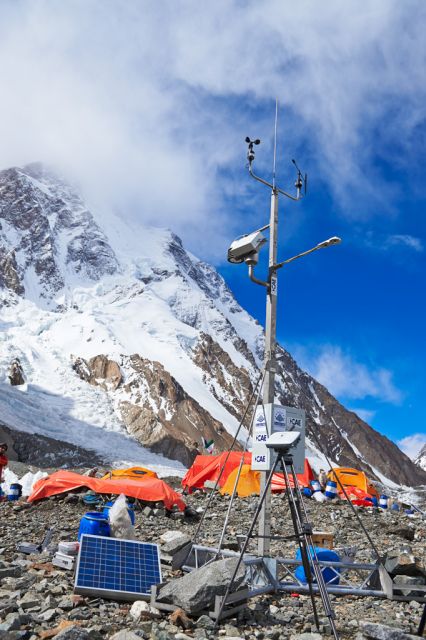 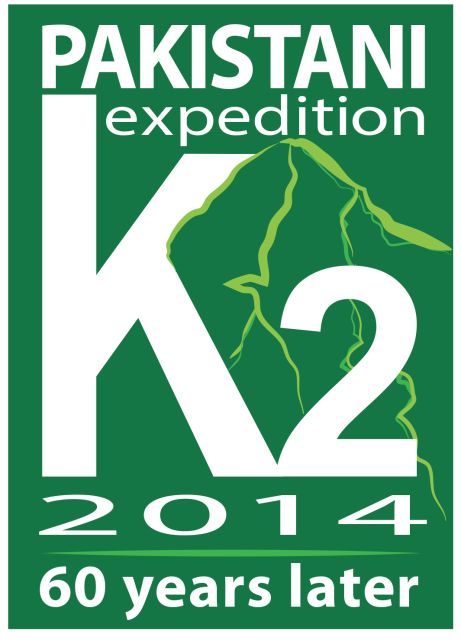 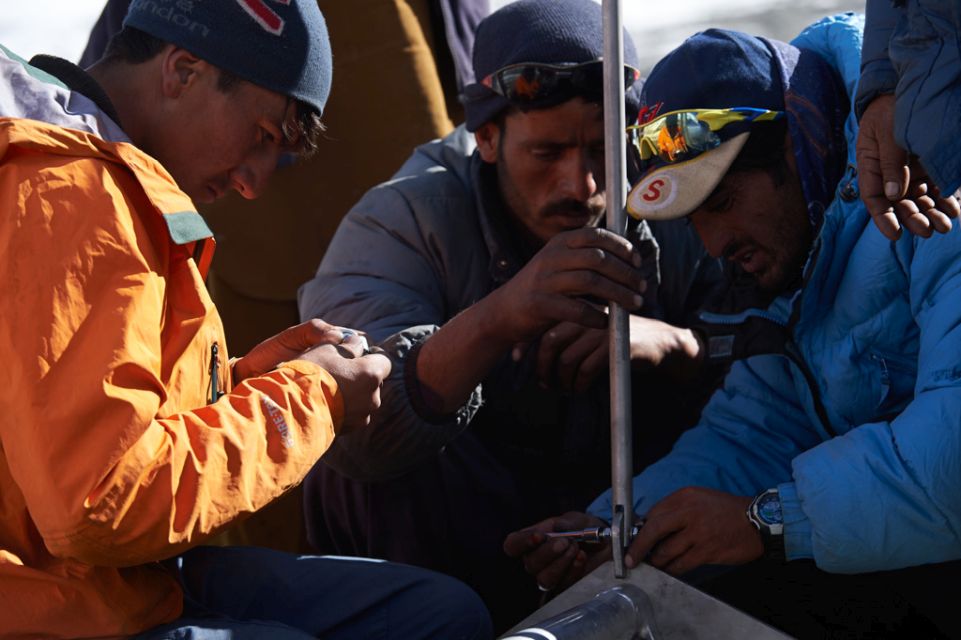 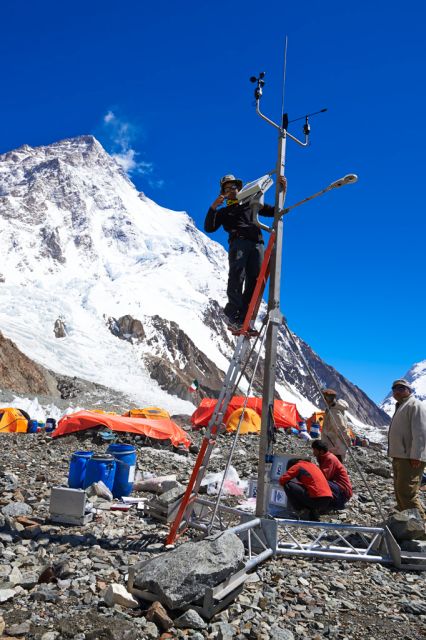 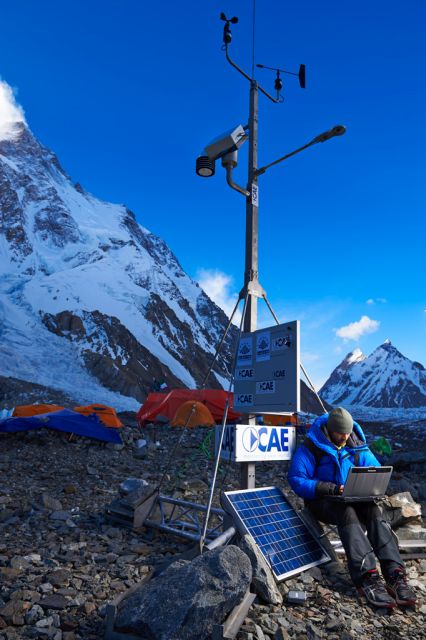